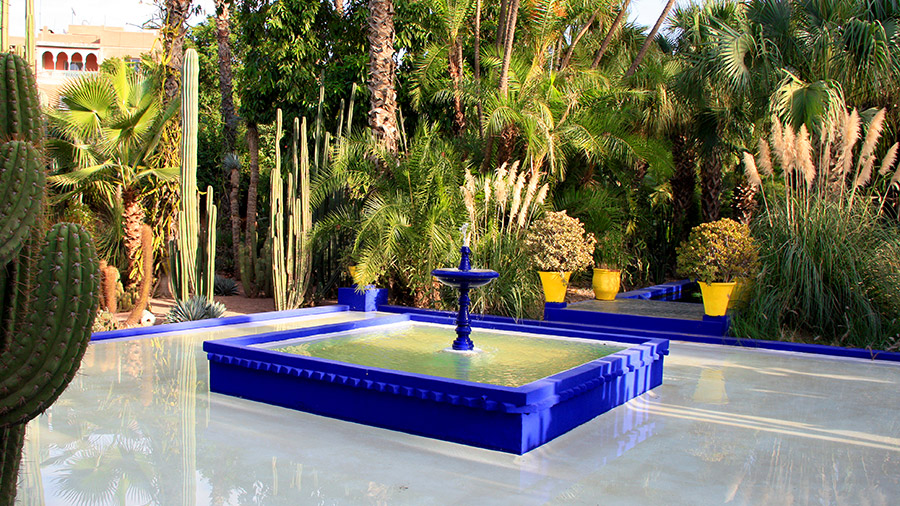 No trip to Marrakech is complete without a visit to the Jardin Majorelle, the beautiful cubist gardens of french artist Jacques Majorelle, which were later bought by fashion designer Yves Saint Laurent and his partner Pierre Bergé as their Moroccan retreat.

Jacques Majorelle purchased the site in 1923 and in 1931 commissioned cubist architect, Paul Sinoir to build a villa. As a passionate amateur gardener, Majorelle set about developing the most beautiful gardens with species from five continents., using colour and shape to create a masterpiece. In 1947 he opened the gardens to the public as a way to fund its upkeep. The wonderful cobalt blue was inspired by Africa and chosen as a way to accentuate the greenery of the gardens. Its actually patented as Bleu Marjorelle!

This garden is a momentous task, to which I give myself entirely. It will take my last years from me and I will fall, exhausted, under its branches, after having given it all my love. Jacques Majorelle

Jacques died in 1962, having been forced to sell off parts of the gardens after his partner had passed away and it sadly fell into disrepair.

In 1980 Yves Saint Laurent and his partner Pierre Bergé purchased the gardens, restoring them to their former glory and respecting the original vision of Majorelle to keep them open to the public.

Filled with rare essences, it has an incredible charm and we felt privileged because at that time, not many people went there. In 1980, when we heard that it might be destroyed as part of a real estate project, we took the decision to purchase it. Pierre Bergé

We were seduced by this oasis where colours used by Matisse were mixed with those of nature. Pierre Bergé  & Yves Saint Laurent

Yves was born in Algeria but considered Morocco his home. He found the light and culture fired his creativity, from colours and fabrics to architecture and the landscape.

The shady gardens are one of the most tranquil places I’ve visited. They remind me a little of Lunuganga, the Sri Lankan retreat of architect Geoffrey Bawa. With over 300 species and a team of 20 full time gardeners, its a wonderful escape from the craziness of Marrakech.

The gardens are open every day of the year.

Entry tickets from about £4