“You just have to do it” says artist and hotel owner Nick Shipton as we sit drinking coffee in Hertford House Hotel, the business that he founded back in 1996 with his partner Wendy. A former art student and DJ, art has long been a part of his life, since as a child he was asked by relatives to copy drawings and paintings for them. We’re discussing life chapters and passions, as Nick has recently returned to painting, having established a small studio in the basement of the hotel, where he produces high energy paintings, crammed with visual motifs and graffiti shapes. Making time for art isn’t easy when you have a business to run, but Nick has a natural impetus to express himself through his work. 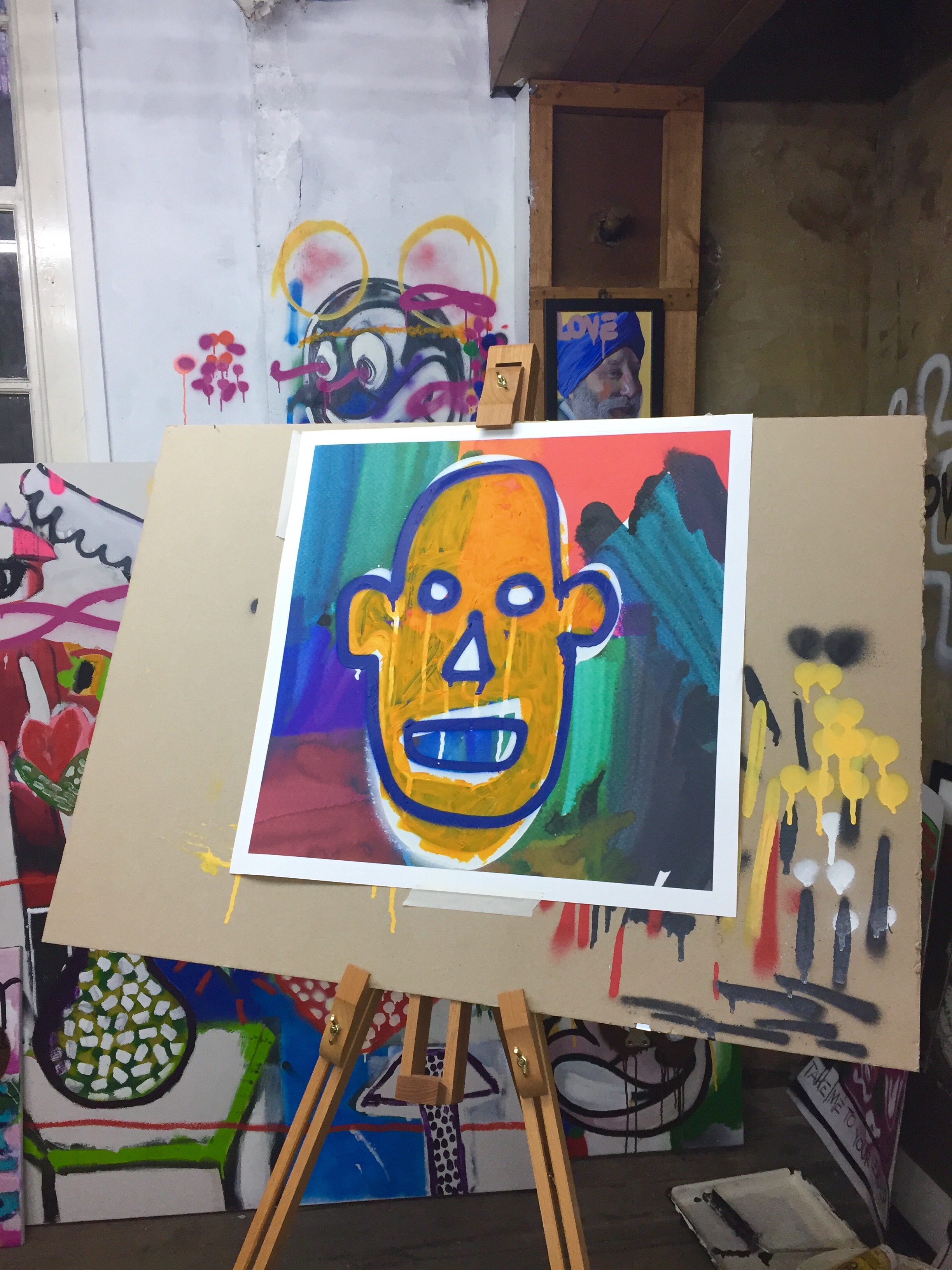 Nick studied art at Ware College before starting a degree at Kingston College. He was asked to leave as he didn’t turn up for lectures. ‘I just wanted to paint’ he explains ‘I was always painting’.

A job with record label AcidJazz took him into the music industry and he became a DJ. Music and art have the same level of attraction to him – the culture and visual language bring together like minded people and a similar vibe. Nick’s dad suggested the idea of running his own bar and his creative focus shifted to creating a destination club and bar in Hertford. Fast forward 20 years and the business has expanded to a 22 bedroom Hotel and restaurant with basement lounge bar.

The music connection is still as strong with visiting hip hop, funk and soul DJs including De La Soul, Trevor Nelson and Neneh Cherry. The one key difference is that Nick’s art is now proudly displayed on the walls.

‘It’s taken me 20 years to feel brave enough to put my work up. I’m proud of my work and I want to sell it, but I didn’t want people to think I was trying to big myself up or show off’.

Interestingly there is no info on the Hertford House website about Nick or Wendy, they tend to keep a low profile. In a town where no art gallery has ever lasted beyond 6 months, being an artist is a tough call, but Nick’s had a good reception so far. DJ Terry Farley took a liking to one of the works and made him an offer.

‘It feels good to sell work, it shows that it speaks to other people, not just me’.

We wander down to the studio to see Nick’s latest work, a collaboration with long time friend and fellow creative, Zakee Shariff. She’s created prints for Nick to paint over; covering existing work is something that he has always done, having been inspired by Basquiat’s resourcefulness in repurposing canvases and surfaces. The outcome is an ebullient collection of print, paint and graffiti, a result of Nick’s fervent approach to making art. There’s a pulse to Nick’s work, much like a music beat.

‘I’m normally in a good mood when I come into the studio. But I’ve had some time recently when I’ve felt angry or frustrated and it’s interesting to see how aggression comes out – I’m not sure where it’s going to go yet but its bringing out different things in my work’

Subject wise, the current work focuses on Nick’s interests and life – there are images of the iconic Hertford monument stag, surrounded by flying saucer eggs (I stole those from Trouble Andrew says Nick) and hieroglyphic-type symbols, coupled with a strong pop sensibility that nods to 80s greats such as Haring and Basquiat.

“I have a memory bank of work I want to make, ideas come to me and I create paintings in my head and file them away. Some of the work I’m making now comes from ideas I had years ago”

I sense that this is just the start and we’ll be seeing a lot more of Nick’s work.  He’s forming a business with brother Mark to sell work and they’re looking into printing t-shirts and working as a collective with other like minded creatives. I love Nick’s creative drive and attitude. As he points out, we haven’t experienced a cultural movement that embraces the different disciplines of art, music, fashion and culture since Britpop and the whole Cool Britannia phenomenon. Who knows perhaps we’re about to witness the start of the next one… you saw it here first…

Nick’s work starts from £50. He has an open studio this Sat 26 November For more info visit www.hertfordhousehotel.co.uk and Nick’s instagram account hhnickyship